October’s opening week saw markets race ahead to new historical highs, before September’s employment report slowed them with news of the negative economic impact of Hurricanes Harvey and Irma.

As the curtain raised on the third-quarter earnings season, stock prices continued to advance, although a health-care policy announcement by the White House dragged health-care stocks lower.

All Eyes on Earnings

Corporate earnings reports picked up steam in the last full week of the month, as did its impact on the markets.

As of October 27th, with 55 percent of the S&P 500 companies reporting earnings, 76 percent have reported actual Earnings Per Share above estimates.2 But, it was the earnings coming out of the big technology companies that galvanized investors, propelling the NASDAQ Composite to a record high.

As the month drew to a close, markets slipped a bit on reports that lower corporate tax rates may be on the horizon, but trading concluded on a positive note as the NASDAQ Composite closed at yet another record high. 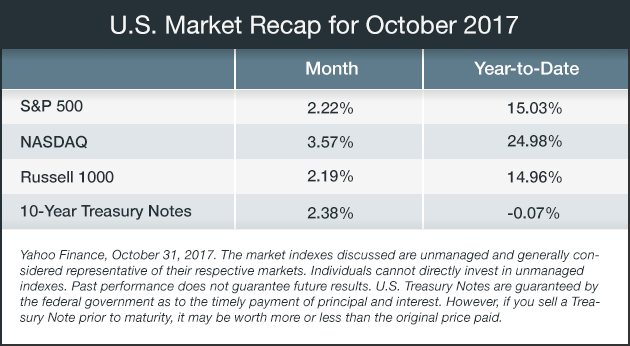 What Investors May Be Talking About in November

The holiday shopping season is about to get underway. Because holiday sales represent nearly 20 percent of annual retail sales, the season is a critical time for many businesses and a bellwether of economic health.4

The National Retail Federation expects holiday sales to increase this year between to 3.6 and 4 percent for a total of around $680 billion.5

Investors won’t wait around for government agencies to tally the results. Instead, asset managers, research analysts and others will walk the malls, survey retailers, and even capture aerial photos of shopping centers to gain a real-time insight into the mood of the American consumer.

As this season plays out, investors may pay attention to not just the overall retail spending number, but also to more granular components, including:

And remember, it’s not just retail stocks that may move this time of year. For instance, shipping and transportation companies may benefit from heightened online activity, and credit services’ revenues may jump with increased sales.

European stocks were mixed last month, with solid gains in France, Germany and the U.K., while prices slipped in Switzerland, Italy and Spain.7 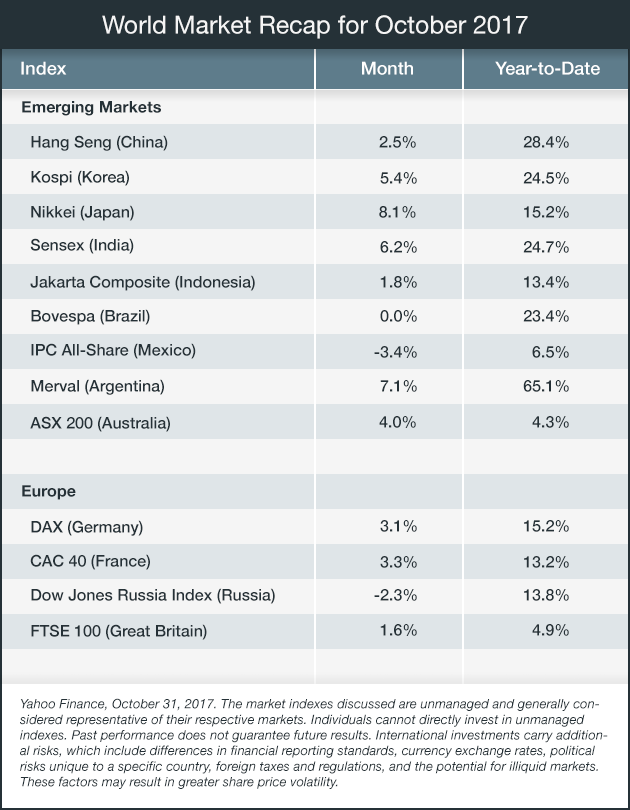 Gross Domestic Product: Despite the drag of two major hurricanes, the U.S. economy grew at a 3.0 percent rate in the third quarter, posting its first back-to-back 3 percent or higher quarterly growth rate since 2014. While consumer spending and business investment were strong, a major contributor to this quarter’s jump was due to a build-up in inventories, which could depress future growth rates.9

Employment: Job growth was negative for the first time in 7 years, with U.S. employers reducing the number of jobs by 33,000. The Labor Department attributed much of this decline to Hurricanes Harvey and Irma. Despite the loss of jobs in September, the unemployment rate still fell to 4.2 percent.10

Retail Sales: Retail spending surged 1.6 percent in September, the strongest single month increase since March 2015. However, this jump was in large part attributable to the effects of Hurricanes Harvey and Irma, with car and truck sales rising as individuals replaced storm-damaged vehicles and from price increases in gasoline due to a disruption in refining and distribution.11

Housing: Housing starts declined for the fifth time in the last six months, falling 4.7 percent due to material and labor shortages that were exacerbated by hurricanes in Florida and Texas.13

Minutes from September’s Federal Open Market Committee meeting confirmed expectations that the Fed was likely to hike rates one last time before the year’s end. However, several officials indicated that their support for a rate hike was contingent on whether inflation will pick up in the closing months of 2017.18

By the Numbers: U.S. Veterans

Number of veterans in the United States: 18.8 million19

Percent of the adult population who are veterans: 7%21

Number of US presidents who served in the military: 29 of 4422

Current members of Congress who are veterans: 10223

Percent of Congress members who are veterans: 19%23

Percent of active-duty military personnel who are female: 15%24

Percent of active-duty officers who are female: 17%24

Number of active-duty officers who have advanced degrees: 4 out of 1024

Length of the landing strip on the USS Theodore Roosevelt aircraft carrier: 400 ft.27

Manufacturer of the first U.S. military plane: The Wright Brothers29

Length of training required for a Navy Seal: 36 weeks30

The content is developed from sources believed to be providing accurate information. The information in this material is not intended as tax or legal advice. Please consult legal or tax professionals for specific information regarding your individual situation. This material was developed and produced by FMG Suite to provide information on a topic that may be of interest. FMG Suite, LLC, is not affiliated with the named representative, broker-dealer, state- or SEC-registered investment advisory firm. The opinions expressed and material provided are for general information and should not be considered a solicitation for the purchase or sale of any security.

Investing involves risks, and investment decisions should be based on your own goals, time horizon and tolerance for risk. The return and principal value of investments will fluctuate as market conditions change. When sold, investments may be worth more or less than their original cost.

Any companies mentioned are for illustrative purposes only. It should not be considered a solicitation for the purchase or sale of the securities. Any investment should be consistent with your objectives, time frame and risk tolerance.

The forecasts or forward-looking statements are based on assumptions, may not materialize and are subject to revision without notice.

The market indexes discussed are unmanaged and generally considered representative of their respective markets. Individuals cannot directly invest in unmanaged indexes. Past performance does not guarantee future results.